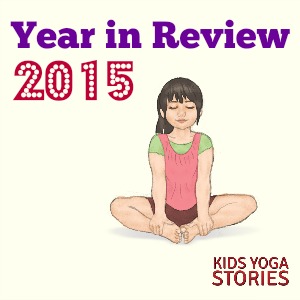 Thank you so much for helping to make 2015 so rewarding for everyone at Kids Yoga Stories.

Last year, the sales of our yoga books for kids and traffic to the website both grew by 150%, and we gave away more than 60 yoga books. Thank you for believing in our kids yoga resources and for reading our weekly Kids Yoga Stories newsletter.

We started the year by releasing our popular Sophia’s Jungle Adventure book in six languages. We were proud to introduce a new seasonal yoga series with the first three yoga books for kids: Rachel’s Day in the Garden, Ella’s Summer Fun, and Jenny’s Winter Walk. Trish’s Fall Photography will be ready in early 2016 to complete the set. Our new ocean yoga book, Maria Explores the Ocean, was released in fall 2015. Our new yoga book packs have been well received, as well. We have more yoga books planned for 2016 (Sally’s Visit to the Farm and Emily’s Day in the Desert), and I’m continuing to write new yoga books for kids. I’m currently working on a story about a mountain hike.

I love writing our weekly free content and have heard from readers that the thematic ideas have been used successfully in homes, studios, and classrooms around the world.  My mission is to bring education, health, and happiness to children everywhere. And I love learning how teachers and parents are integrating yoga into their children’s lives. From a Physical Therapy session in New England to a homeschool in outback Australia and to an English-learning school in Spanish, yoga for children is spreading worldwide. So inspiring!

Below, you will find our 2015 year in review with links to our most popular yoga stories and kids yoga sequences:

Rachel’s Day in the Garden tied for Book of the Year and won the Children’s Category in this year’s Independent Publishers of New England book awards. This was an unbelievably exciting moment not only for my family and me, but also for the kids yoga community. The fact that a yoga book for kids was recognized in the public community means to me that people are curious about integrating story and movement. Very inspiring indeed!

Brooke says:
“Rachel’s Day in the Garden by Giselle Shardlow is a gorgeously illustrated and beautifully written children’s book. We follow Rachel and her puppy, Sammy, for a day of fun and yoga in the garden. This was such a cute story! I loved reading this with my three-year-old, and she had fun trying out the yoga poses with Rachel. This is definitely a great book for preschool through early elementary ages. Boys and girls alike would have a great time reading and doing the yoga poses.” 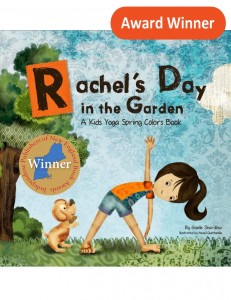 The most popular yoga book this year (once again) was Sophia’s Jungle Adventure. The book was inspired by my hike to a waterfall in Costa Rica. This was our first yoga book, and it remains our most-loved yoga book. This book was also released in seven different languages this year (Russian, Chinese, Portuguese, Spanish, German, French, and Italian).

Sandra says:
“Sophia’s Jungle Adventure was brilliant. With an emphasis on imagination and having fun, this story ignited my son’s enthusiasm for yoga poses, and I love this because I can see his physical abilities being challenged and his mental well-being being nurtured. An added benefit of the simple story layout was that it drew our family together (husband included) to experience some yoga and quality bonding time together.”

In a tie for second place were Good Night, Animal World, Anna and her Rainbow-Colored Yoga Mats, and Luke’s Beach Day.  The Spanish and Portuguese translations of these titles were popular, as well.

The most popular yoga cards for kids this year were the Yoga Poses for Kids Cards. Read about How to Play with Yoga Cards for Kids here.

Denise says:
“I used the cards yesterday as I was teaching a summer camp, and they already had the theme of kings/queens/gnomes. After acting out a yoga story about the kingdom, we played a game of memory, and I pulled some of the cards that we acted out in the story. The kids had a blast. Such good fun!”

According to Google Analytics, our top 10 most-viewed Kids Yoga Stories posts this past year were:

For your convenience, find loads of thematic kids yoga lesson plans and sequences in these four roundups:

As you probably know, we are active daily on a variety of social media channels to spread the word on the benefits of yoga for children. I spend most of my time engaged on Facebook, but I also love researching on Pinterest. Come join our growing community:

This year, I applied to guest post on larger parenting, education, and wellness publications online. I was thrilled that my voice was published on the following websites:

Don’t forget to subscribe to the weekly Kids Yoga Stories newsletter to get up-to-date information with this year’s content and newly released yoga books. We are planning a few things in the coming months:

As always, please let us know if you have any feedback or suggestions for Kids Yoga Stories. We are constantly looking ways to grow our community and help serve you with yoga tips and kids yoga resources.

Thank you for your love and support. Here’s to another amazing year bringing the benefits of yoga to children!