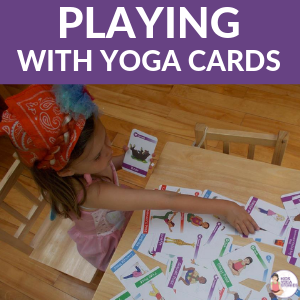 Learn, be active, and have fun!

Yoga cards for kids provide an engaging and easy way to practice yoga poses, whether your child is a beginner or an expert yogi. Introduce one yoga pose at a time or put a few yoga poses together to create a meaningful story sequence. Make the yoga experience relevant and meaningful to your children, and no doubt, they will be coming back for more.

Use the yoga cards in your home, classroom, or studio. Or take yoga cards with you on your travels. Yoga cards also encourage independent creative play. Let children’s imaginations run wild, while they move their bodies!

Get Your Free Printable Here

10+ Simple Ways to Play with Yoga Cards for Kids

Today, I’d like to share with you nine ideas for playing with our yoga cards for kids:

Use the category color band on each card to help match the keyword and corresponding yoga pose. Then you can practice the poses associated with each keyword. Talk about your favorite pairs and which ones are easiest to remember.

Pick three to six yoga pose cards (with or without their matching keyword card). Then create a yoga pose sequence. You could make up a story or situation to go with the sequence. For example,  Dancer + Tree + Eagle cards: you could pretend to be a fairy who goes to a ball in the trees and dances with an eagle.

Place only the pose cards facedown together in a pile. One player flips over the top card, and everyone has to “strike a pose.” You could do this with pose cards, keywords cards, or the whole pack.

Place all the yoga cards upside down in rows. Take turns flipping up two cards at a time. If the player gets a yoga pose matched with its keyword, then that player keeps the pair. The game continues until all pairs have been matched up.

Gather together a deck of keyword cards and place facedown. Each player takes a turn at selecting the top keyword card and has to guess the matching yoga pose. For example, if the player picks a “dog” card, he or she has to say or act out Downward-Facing Dog Pose. If the player can’t remember the matching yoga pose, then he or she can ask her friends for help. Repeat the process until each player has had a turn.

Choose one category of cards to gather together (ex. Travel, Earth, People, or Animals). Create a logical, safe yoga sequence with all or some of the yoga pose cards in that particular category. For example, in the Earth category, you might choose Seed + Flower + Tree to create a flow sequence.

Gather together a deck of only the pose cards and place them facedown. Each player takes a turn at selecting the top yoga pose card, without any other players seeing the card. The player demonstrates the pose on their selected card, and the rest of the children have to guess the name of the yoga pose. Repeat the process until each player has had a turn.

Gather together a deck of pose cards. Pick one yoga pose card at a time and brainstorm a list of other keywords that could represent that yoga pose. For example, Squat Pose could be a duck, monkey, frog, or ape.

Using the entire Yoga Poses for Kids Cards deck, have each child come up with his or her very own signature yoga pose sequence (maybe three to five poses, depending on the age and needs of the child) that could be used to help calm their bodies and minds. Spend some time going over their sequence, ensuring that it’s easy for them to practice and remember the sequence.

How to play a dice yoga game with yoga cards for kids:

You could use a large die if working with a large group of kids. This simple dice yoga game would be great to bring traveling with you because all you need is a set of dice and yoga cards. Your child can easily change up the game by simply sticking the numbered sticky notes on different cards.

How to play a yoga poses card game:

Download thirty Yoga BINGO cards that have the twenty-five yoga poses from our Yoga Poses for Kids Cards (Deck One) or customize your own. Click here to get started!

Here’s how we played the Yoga Pose Memory Game:

Here’s an example of how our memory yoga game looked:

See How to Play a Yoga Pose Memory Game here.

The other day, my daughter and I were looking for something fun and active to do indoors on a rainy afternoon. We got out her fidget spinner and a deck of yoga cards and played a yoga pose spinner game. It was super fun!

How to Play a Yoga Pose Spinner Game:

You can change the pose cards after a few rounds and play again!

Practice counting while learning yoga poses for kids in this move it game yoga-style!

How to play a Move It Yoga Game:

How to Play a Breathing Exercise Game with Popsicle Sticks:

Wondering what to do with your leftover Halloween candy? Play a Skittles Yoga Game!

Here’s how to play:

18. Would you Rather Game

This “Would You Rather?” game is great for playing in many different situations–from one child through to a large group. It’s also a great game to play online in your kids yoga Zoom class.

This game is fun to play to engage children in the choosing of the poses. It’s also a great way to introduce new or thematic poses. For example, if you’re introducing a new topic in your classroom, you could use this game as a way to build prior knowledge and vocabulary on that topic.

How Others Play with Yoga Cards for Kids

“I am a speech language pathologist in the school system. When I tell you I use them every day, I am not kidding! We move through centers every 12-15 minutes, and before we move to the new center, we gather on our carpet, and a specific student gets a turn at picking a new pose. They LOVE IT! We can have 8-9 different centers in one day!”

“One young lady led a yoga class with them already!”

“I used the cards yesterday as I was teaching a summer camp, and they already had the theme of kings/queens/gnomes. After acting out a yoga story about the kingdom, we played a game of memory, and I pulled some of the cards that we acted out in the story.”

“We placed some yoga cards in the classrooms and took pictures of staff and children doing simple yoga poses together.”

“I did another Memory game with an 11-year-old yesterday. After studying the 12 cards for a minute, we put all of the animal cards face down (from the Good Night, Animal World book) and then took turns holding the pose names while the other chose a card. We then had to try to remember where the animal matching pair was—if we got a pair, we did the pose.”

“Last week I had a group of year 6’s (age 10-11) and the energy was really high in the room. I decided to hand the lesson over to them and see what they came up with. They each chose a yoga card and got into groups of 4-6. I gave them some time to come up with a story to link the poses. The results were fantastic and really diverse. I certainly wouldn’t have come up with as many ideas as they had. Their breathing and relaxation practice that followed was much calmer than usual because they had used up their creative energy and were ready to be guided. A great learning curve for me … Pass over the control!”

You May Also Enjoy