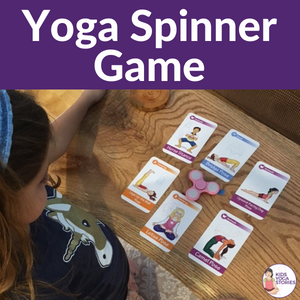 My daughter and I were looking for something fun and active to do indoors on a cold and rainy afternoon. We cleaned out her school backpack and found her fidget spinner jammed in the bottom since the fad seems to have passed. A deck of yoga cards was already out on the table, so we decided to make up a yoga pose spinner game. It was super fun!

For a few moments that day, I was actually feeling like a “super yogi mom.” I’ve talked to other yogi mamas before, and we are often flooded with emotions. We would love for our children to love yoga as much as we do, and we struggle to find ways to engage our children in this ancient practice in a fun and easy way. The fidget spinner seemed to do the trick that day.

Try this yoga spinner game—and let me know if it doesn’t just evoke laughter and movement. Give yourself permission to make yoga silly and fun, too!

How to Play a Yoga Spinner Game:

You can change the pose cards after a few rounds and play again! You could also put three yoga cards on top of each other and then practice that 3-pose flow when you land on that pile. Or place the yoga cards upside-down—then it’ll be a surprise which yoga pose you get.

What other variations can you come up with to play this yoga pose spinner game?

Get Your Free Printable Here