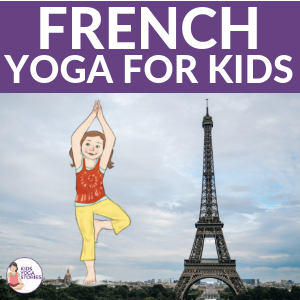 France has so much to offer in terms of history, beauty, food, and art. I have fond memories of backpacking through France when I was younger—wandering through the streets of Paris, lazing on the beaches in the South of France, and (my favorite) a visit to Monet’s garden. Growing up in Canada, we learned French in school, so it was fun to practice speaking French while traveling.

France also has a growing yoga scene, including yoga studios within its cities as well as retreats in the countryside. But what if you’d like to teach your children yoga in French? What resources are available?

French yoga resources may be difficult to find, but we have a few that will hopefully get you started, including five French yoga poses for kids that honor some of the beauty and architecture of French life.

Additionally, we’re thrilled to share that two of our most popular yoga books were translated into French, Sophia’s Jungle Adventure and Anna and her Rainbow-Colored Yoga Mats, due to many requests from our French Canadian readers. You can join Sophia or Anna on their adventures while practicing yoga with your children in French. Fantastique!

Below you’ll find two of our yoga books translated into French, so you can act out these stories through movement while practicing French:

A huge thank-you to Sandra from the Partenariat communauté en santé (Francophone Health Network) in Yukon for offering to translate these yoga posters into French:

If you’re looking for other resources, check out these articles:

5 Steps to the Figure & Fluency of a French Woman: Yoga in French – Part Three

What are your favorite French yoga resources for kids? Share your ideas, suggestions, and resources below!