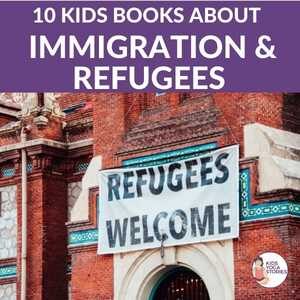 Please welcome our editor, Stefanie, who has been working with us at Kids Yoga Stories for almost a decade. She holds a master’s degree in library science, with a focus on children’s services, and today, she is sharing ten special stories about immigrant children to create inclusive and compassionate libraries, classrooms, and homeschools. One of the yoga principles is about Ahimsa, which is loosely translated from Sanskrit as “non-harming”. By encouraging empathy for immigrants and children from various cultures, we are giving immigrant children a chance to see themselves in children’s books and provide an opportunity to educate all children about the plight and challenges of refugees.

Studies have shown that children begin recognizing race as early as two years old, and by five to six years of age, that recognition can take hold as a stereotype. Children begin to understand and attach negative connotations to said stereotypes around five and six, as well, and these grow stronger with age (Sotirovska & Kelley, 2020).

Carefully chosen children’s literature gives educators and librarians serving children the opportunity to interrupt this process of negative perception by their peers in order to provide immigrant children with a safer place to explore their own social-emotional awareness. Classroom teachers are especially aware of the need for SEL resources for children.

Stories that reflect the displacement, fragmentation, and pluralization of immigrant experiences are especially powerful for the purpose of empathy as well as representation among immigrant children (Sotirovska & Kelley, 2020).

Refugees arrive in the United States from more native countries than in previous decades, and government reception and placement services last as little as ninety days (Dowling, 2017). Providing immigrants with a cornerstone within the community where they have resettled is integral to avoiding further emotional trauma, as well as empowering children to explore their emotional boundaries.

The Name Jar
by Yangsook Choi

This contemporary realism picture book includes lovely descriptions of physical effects of emotions, like blushing or feeling hot, giving plenty of opportunities to discuss naming emotions in an SEL context. The family interactions portray somewhat stereotypical expectations of Asian children, but the cultural references and the emotional connections they inspire within the main character are thought-provoking. The story revolves around the cultural importance of Unhei’s Korean name, even though she feels pressure to choose an American-sounding name. The experience is likely to be familiar to Asian immigrants, and it might inspire better appreciation of names from various cultures. Children ages five through ten would best understand the impact of the themes.

For readers ages four through eight, Carmela Full of Wishes is a lighthearted story about the daughter of an immigrant. The clues that tell readers her parents are immigrants are subtle, but still offer representation of their culture and experiences that are likely to feel familiar to other immigrant children. The ending offers an opportunity to introduce mindfulness, as Carmela’s brother takes her to the oceanside to listen to the sounds of the ocean to calm her after a major disappointment.

What is a Refugee?
by Elise Gravel

This nonfiction book uses simple, colorful illustrations and easy-to-understand language to describe the definition of “refugee” as well as common experiences of refugees. Its direct explanations of complex ideas could be understood even by kindergarten listeners, and the hypothetical circumstances presented in the text are relatable. It would be best used for children who are not refugees themselves so that they can better empathize with the circumstances that led to refugees settling in other countries, facilitating stronger connections between the community and new arrivals to the community.

Areli is a Dreamer: A True Story
By Areli Morales and Luise Uribe

This autobiographical children’s book tells the story of a DACA recipient who came to the United States as an undocumented immigrant. Her story and her complicated, conflicting feelings about leaving Mexico and her grandmother inspire incredible amounts of empathy. There are many Spanish words incorporated into the text, and the beautiful, colorful illustrations offer plenty of facial and body language cues to discuss emotions. The story lends itself to discussions about what it means to be an immigrant and what it means to be an American, as well as how we find our place within a family, especially when they do not all live under the same roof. Children ages five through ten would be the best audience.

The bold, colorful illustrations capture Morales’s Mexican culture beautifully. The story represents the immigrant experience in America, including difficulties learning English, understanding cultural differences, and encountering the police. The poetic text incorporates Spanish into the English prose. The facial expressions and clues hidden throughout the book express emotions wonderfully. For those who have not experienced immigration themselves, this inspires empathy for the frustrations and hopes immigrants feel. Dreamers is contemporary realism, but its poetic prose is lovely, and readers ages four through ten would be the best audience.

My Name is Yoon
By Helen Recorvits and Gabi Swiatkowska

The story of a young girl whose family has immigrated from Korea is a wonderful mirror for children who have recently immigrated to the United States and are working to find a balance between their cultural identity and their place in a new culture with different norms. Yoon is at first reluctant to participate in writing her name in English, because she is still missing life in Korea. As she encounters new English words, she uses those words to describe her emotions. Empathy from a new friend finally breaks the ice, and this is also an important concept to share with children who share the classroom or community with immigrants who may feel isolated. Swiatkowska’s delicate illustrations are very expressive, complementing the contemporary realism and giving young readers the opportunity to connect with the language of facial expressions along with the text. Readers ages four through ten would be the best audience.

In a class where every student comes from another place and everyone else remembers that place, Lola struggles to recall anything about the Island, where she was born. Her class project leads her on a journey through the memories of her neighbors and relatives, who tell stories of a monster that threatened the Island. Leo Espinoza’s vibrant, colorful illustrations bring to life the stories of the brave citizens who stood up to the Island’s monster. It is a wonderful lesson in how people can carry their rich cultural heritage with them wherever they go.

With powerful illustrations on a solid black background, Watanabe uses anthropomorphic animals to bring to life the trials of immigration without words. When the animals leave the forest, Death accompanies them, depicted as a skeletal figure in a floral shawl. It is incredibly thought-provoking, and it could be used as a springboard for discussion among children ages five through ten. The power of this book lies in its flexibility because the animals are relatable to nearly any immigrant whose journey was dangerous, despite their cultural connections–and it is engaging for those who have not experienced such trauma. The illustrations tell a story that transcends language.

My Name is Sangoel
By Karen Williams, Khadra Mohammed, and Catherine Stock

New immigrants escaping dangerous situations in their home country will relate to Sangeol’s story of coming to America after his father is killed. The illustrations beautifully capture Sangeol’s uncertainty. The pictures of his hometown are less cluttered and filled with warm colors, but the pictures of his family’s arrival in America are cluttered and cold. As he becomes more familiar with his new community, the illustrations feel less chaotic. By the end, his new friends have accepted him, joining him in a project about their names. This is a wonderful example of contemporary realism to inspire discussions about accepting others and finding ways to relate to new friends, best for readers ages six and up.

The Arrival
By Shaun Tan

This wordless graphic novel captures the immigrant experience through the story of an immigrant who leaves his homeland in search of a better life, so that he can send for his family. The illustrations use fantasy elements to fully envelop the reader with this world of new creatures, customs, and languages. It is an excellent window, mirror, and sliding glass door because it is relatable to immigrants who have experienced the uncertainty of immigration firsthand and also presents a compelling analogy for anyone who has not experienced this. The fantasy elements allowed Tan to create a character whose background is vague enough to apply to a wide variety of immigrant experiences. Readers twelve and older are more likely to appreciate the nuanced illustrations and make the connections between the themes and illustrations without the guidance of text.

In the Spirit of a Dream
Aida Salazar

After sharing this article with the Kids Yoga Stories community, we received an email from Heather, asking if we have read In the Spirit of a Dream: 13 Stories of American Immigrants of Color by Alina Chau and Aida Salazar. She said, “It is another wonderful read that I have used in my classroom.” It is a beautifully illustrated book with inspiring stories of immigrants who traveled to the United States in pursuit of a better life and became heroes in various fields, including sports, music, medical profession, and art.

Stefanie Spangler Buswell has been passionate about books and stories her whole life. She is an author and editor, as well as an elementary substitute teacher with a master’s degree in library and information science focused on children’s services. She currently resides in rural Illinois with her family.

CHECK OUT OUR LEARN ABOUT ME PACK

Explore with your child their inner world with these fun, engaging, and thought-provoking card decks.

1. ANIMAL ALLIES CARDS: Fun and imaginative ways for children to connect to the spirit and symbolism of the animal kingdom

2. BE MY BEST YOGA CARDS: Are your children ready to be the very best versions of themselves?

3. CHAKRA YOGA CARDS FOR KIDS: Help children learn the basic energetics of their growing bodies and minds with Chakra Cards for Kids.

SAVE IT FOR LATER