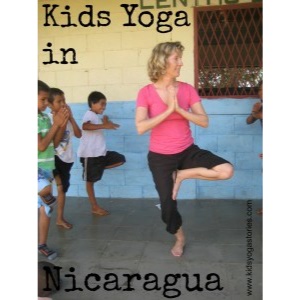 “Latin America” is the focus of the month at Kids Yoga Stories.  When I heard that Kristyn was teaching kids yoga in Nicaragua, I asked her to tell us about her experience.  Kristyn Zalota is the founder of CleanBirth.org, a non-profit working to improve maternal and infant health in Laos.  She holds a MA from Yale, and is a certified yoga instructor, doula and Lamaze educator.  She lives in New Haven, CT with her husband and two children.  Click here to watch Kristyn talking about her project.  Email her are kzalota@cleanbirth.org.

Yoga has brought me to some amazing places.

I have taught Burmese trauma survivors in Thailand, moms and children with HIV in Cambodia, midwives in Uganda and at-risk kids in Nicaragua.  This work has changed my life and led me to start a non-profit, CleanBirth.org, which makes birth safer in Laos.

My family and I have temporarily relocated to Granada, Nicaragua so that my kids, aged 5 and 8, can learn Spanish.  To help out at their private school, I am teaching kids yoga to children from Nicaragua, Spain, the US, and Holland.  The school is expensive by Nicaraguan standards ($150 p/mo) and very good.  In addition to academics, the kids are used to having “specials” like P.E. and art.

However, throughout Nicaragua, schools are bare bones.  As I teach at the comparatively swank international school, I can’t help but think of a school in  a village called Santa Ana. It is just a few miles and a whole world away.  I taught yoga there last year, as a volunteer for a Granada-based non-profit, and it is a day that I will never forget.

The journey itself was memorable: a bus to a tuk tuk to a horse cart, whose driver was 7 years old.   When the non-profit staffer and I arrived in the village, the children ran out to greet us.  I can still see those bright, big smiles. 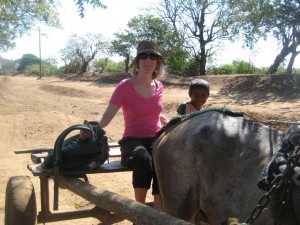 We toured the village, so that the woman I was accompanying could check in on families and ensure that children were attending school.   The houses we were invited into were one-room, some with dirt floors, and open fires for cooking adjacent to the houses.  Animals and small kids ran amok.

After the rounds, we gathered all of the kids who wanted to participate on the front porch of their school.  The kids swept the floors and then we began to do kids yoga together.  There were those smiles again.  The kids were so willing to try, laugh and fall down.  Just like kids everywhere, they loved the animal poses and making noises.  They giggled at my funny faces and strange postures. 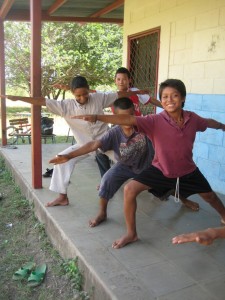 They probably weren’t used to see adults playing.  Like in so many impoverished places, the adults in their life probably didn’t have time during their days filled with farming and housework.

During the relaxation, the children became quiet and still.  All of them. No rouge squirmer or friend distracter.  There was a breeze and their quiet was only disturbed by cow bells and insect noises.

As always, when participants are quiet and relaxed, I hated to end the session.  But I had a horse cart to catch.  So we sat together and tried out “Namaste” a funny word for Spanish tongues. 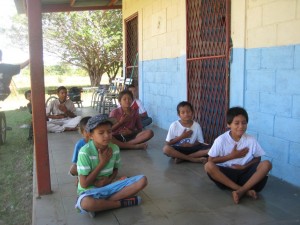 Then two boys got up and walked across a field to what looked like an ordinary house.  They returned with an ice cold coke for me and all the kids said “Muchas Gracias” in unison.  Cold coke and sweet thanks.  What could be better?

I will return to Santa Ana during my time in Nicaragua, this time with my own children.  They will get to see a much simpler life, with its hardships and sweetness.

Yoga brought me to Santa Ana.  Yoga has brought me closer to children, parents, grandparents around they world in a way only yoga can.  For that I am so grateful. 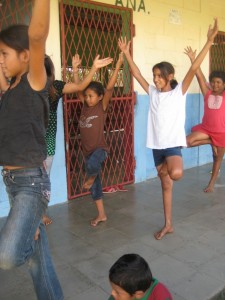 Find more about Kristyn and her incredible work at CleanBirth by following the links below.  Please share the project with anyone you know who might be interested and consider donating to her cause.  Thank you to Kristyn for inspiring us with her story of kids yoga!

Do you have a similar story to tell of teaching kids yoga in a different country?  We would love to hear about it!  Please email me at giselle at kidsyogastories dot com.